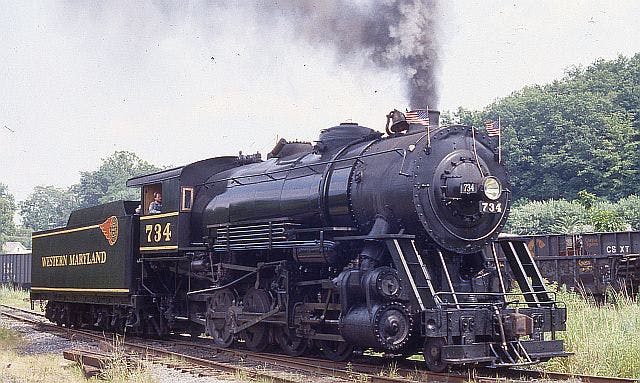 No. 734 recently turned 105 years old! While it has become a much-loved icon on the Western Maryland Scenic, no. 734 is not actually an authentic Western Maryland steam locomotive.  No. 734 was built as part of an order of large 2-8-0’s for the Lake Superior & Ishpeming (LS&I) Railroad of Marquette, Michigan. Built as the railroad’s no. 18, this was eventually changed to no. 34 and she remained in service until retirement in 1961. In 1963 she was sold along with many other LS&I 2-8-0’s of various sizes, and eventually ended up at the Illinois Railway Museum along with sister no. 35. Sister no. 33 also survives today at the Age of Steam Roundhouse in Sugarcreek, Ohio.

In 1991, the Western Maryland Scenic Railroad was shopping for a steam locomotive. There are only two surviving Western Maryland steam locomotives: The “Big 6” shay at Cass Scenic Railroad and 4-6-2 no. 202 on display in Hagerstown, MD. Neither were available or even suitable for the railroad’s needs. Recently discovered files indicate that the purchase of a new SY class 2-8-2 from China was considered, but this did not materialize. Instead, it was decided to acquire LS&I no. 34 and “kitbash” it into a locomotive resembling a Western Maryland 2-8-0. The engine was just what the railroad needed…at the time.   When the locomotive returned to service in 1993, it looked quite different from her freight-hauling LS&I days.

Several cosmetic changes and a tender from a New York Central 4-8-2 “Mohawk” completely transformed the appearance of the engine into a suitable stand-in for the long-gone Western Maryland 2-8-0’s. Except for a period out of service in the early 2000s for retubing and other repairs, no. 734 gave the railroad many years of service until it was withdrawn in 2016 for the federally mandated 1472-day inspection.  Towards the end of no. 734’s recent working period, it was determined that it would need an extensive overhaul. Over the years, the day-to-day operations of the Western Maryland Scenic Railroad had changed and began to outgrow the engine’s tractive effort. Schedules were more demanding, and trains were heavier. No. 734 was often pressed far beyond its normal operating capabilities or needed a diesel helper which required a second crew and generally increased daily operating costs.

A larger engine that could handle the heaviest trains solo was needed, so the railroad again went shopping, and found ex-Chesapeake and Ohio (C&O) 2-6-6-2 no. 1309 at the Baltimore & Ohio Railroad Museum.   Initially, no. 1309’s overhaul was estimated to cost approximately $1 million. However, when the locomotive arrived and disassembly began, the crews discovered the locomotive was almost completely worn out. In the 1309’s short service life, it had been used by the C&O as a stopgap measure to fill in until newer diesel locomotives could be obtained and were given little maintenance.   In 2017, no. 1309’s overhaul had outgrown the capabilities of the railroad and the effort was turned over to Diversified Rail Services who brought in several steam experts from all over the country. The decision was made that if the job was worth doing, then it was worth doing right – even if it meant delays and a revised and more costly estimate for its restoration.

The brand-new mechanical team of staff and volunteers brought in to complete the overhaul of no. 1309 have implemented a new standard of maintenance and daily operating procedures which will benefit the overall condition of the steam fleet going forward. This same team moved no. 734 from her storage location to just outside the shop building where it can be easily accessed. At a work session earlier this year, volunteers began removing the jacketing and lagging from the boiler and cylinders and assessing the locomotive’s overall condition and preparing it for light cosmetic repair work.  A common question we hear is “When is the restoration on 734 going to start?”

Contrary to popular belief at the time, the engine was withdrawn, no. 734 is not mechanically sound. Our new mechanical team has found accounts and inspection forms that indicate the locomotive was performing well below peak efficiency during her final years in service. The locomotive was often pushed far beyond its normal operating capabilities, which has resulted in extreme wear and tear of many key components, particularly the running gear.

Preliminary inspections reveal that the locomotive is indeed in extremely worn mechanical condition and will need an extensive overhaul which promises to be both lengthy and expensive. If undertaken, it would also mean a significant investment in a locomotive that no longer meets the daily needs of the railroad, though this does not remove the possibility of no. 734 operating on the lighter, off-season trains and as stand-by power for no. 1309.   So, what does that mean for the future?

No. 734 will be cosmetically stabilized and continue to receive attention to keep its condition from deteriorating further as time and resources allow. The railroad has many other projects that will require our attention before any work can begin on no. 734 in earnest. As we reach the end of no. 1309’s overhaul and prepare to re-awaken the railroad after the shut-down caused by the COVID-19 Pandemic, we want to focus on improving our facilities and fleet of rolling stock as well as keeping 1309 in ready and reliable service. While it is our intention to return no. 734 to service one day, this will ultimately be determined by the outcome of a thorough evaluation.

We cannot commit to an overhaul start date and timeline until this has been completed and we have determined a scope of work and estimation of cost. Once we have completed the 2021 season, we will be exploring more options for no. 734’s future, including initiation a fundraising campaign, but we do not anticipate beginning work in earnest at any time within the next few years.   For now, it is no. 1309’s time to shine but, if circumstances allow no. 734’s time in the spotlight could come again someday.