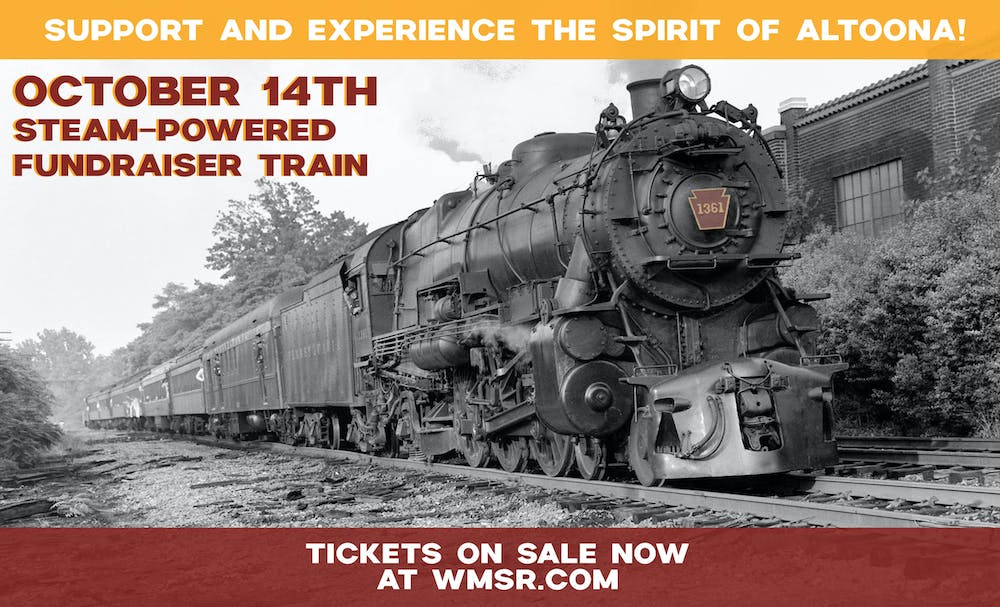 CUMBERLAND, MARYLAND – A new partnership between the Western Maryland Scenic Railroad (WMSR) and the Railroaders Memorial Museum (RMM) in Altoona, Pennsylvania will raise funds for the restoration of famed steam locomotive no. 1361. On the evening of October 14th, a special first-class train will operate between Cumberland and Frostburg, Maryland, and feature two nighttime photo opportunities, live music, and a raffle for passengers to ride in the cab of Western Maryland’s own historic steam locomotive on. 1309. Tickets are on sale now at wmsr.com.

“Western Maryland ’s ability to draw passengers from all over the world shows exactly the kind of broad economic and cultural impact we can have when our own steam locomotive is operational again,” said Joseph DeFrancesco, Executive Director for the Railroaders Memorial Museum. “The railroad is a great venue for tourist railroading, and this fundraiser train will help contribute to the museum and the 1361’s overhaul.”

“Our recent success in completing our own locomotive restoration has set us to help other like-minded organizations, and we couldn’t be happier than to welcome supporters of 1361 aboard,” stated Wes Heinz, Executive Director for WMSR. “In the future, we could likely host 1361 in the Allegany region, and fundraisers like this will be key to making that a reality.”

Officially launched in May of 2021, the renewed rehabilitation of Pennsylvania’s official state steam locomotive’s restoration The Spirit of Altoona is underway. Championed by rail preservation advocates Wick Moorman, former CEO of Norfolk Southern, and Bennet Levin, the total expected cost for the restoration is between 2-3 million dollars. For more information, visit railroadcity.org/1361.html.

Current plans call for the fundraiser train to carry the whistle from 1361, giving passengers a preview of what the locomotive will sound like pending completion of its restoration.

About the Railroaders Memorial Museum

Founded in 1972 as a non-profit corporation, the Railroaders Memorial Museum has served as the primary organization preserving and interpreting the story of the Altoona railroader. Generations of residents brought skill, dedication, and loyalty to help form what would become the world’s largest railroad amid the steam era. After steam, many of those workers would be without jobs in an era of changing technology and evolving economic climates. Through its historic sites, programming, exhibits, and heritage rail operations, the museum seeks to keep the railroader’s story alive through means of economic development, and education, and serve as a cultural tourist attraction throughout Central Pennsylvania and the Commonwealth of Pennsylvania.

About the Western Maryland Scenic Railroad

The Western Maryland Scenic Railroad is a heritage railroad based in Cumberland, Maryland that operates passenger excursion trains and occasional freight trains using both steam and diesel locomotives over the former Western Maryland Railway right-of-way between Cumberland and Frostburg. Conceived as an attraction to bring visitors to the region in 1988, the nonprofit is dedicated to providing a reflection of the past and driving economic impact in the Allegeny region. By continuing education, preservation, restoration, and operation of the railroad, WMSR serves as a foundation for tourism, hospitality, and commerce in Western Maryland by providing a world-class railroading experience. Following a leadership change in 2021, WMSR embarked on a rebranding and reimagining of its property, operation, community support, and outreach within the preservation industry.