Skip to primary navigation Skip to content Skip to footer

1309 is back under steam! Your contributions will help keep it rolling.

A NEW YEAR IN STEAM

On the last day of 2020, steam locomotive no. 1309 took its first steps under steam in 64 years! Go behind the scenes on this monumental effort to bring steam back to the Western Maryland.

Constructed in 1949 by the Baldwin Locomotive Works, Chesapeake & Ohio Railway steam locomotive no. 1309 was built to handle the railroad’s heaviest coal trains throughout Kentucky and West Virginia until it was retired in 1956.

64 years later, no. 1309 is undergoing a meticulous and extensive restoration to service. When complete, the locomotive will become an outstanding tourist attraction operating trains between Cumberland and Frostburg, Maryland, and the largest operating steam locomotive of its type in the world.

This monumental effort has been largely funded by generous grants and private donations which have helped us raise over a million dollars to date.

Your help is needed to complete the 1309 and return the stirring sights and sounds of a steam locomotive to the Cumberland Valley.

All donations are tax-deductible

Diversified Rail Services has been contracted to complete 1309 as time and funds permit. As the end of the restoration nears, the steam team must accomplish the following work:

Here’s is just a partial list of projects completed to date since 1309 was placed back on its driving wheels: 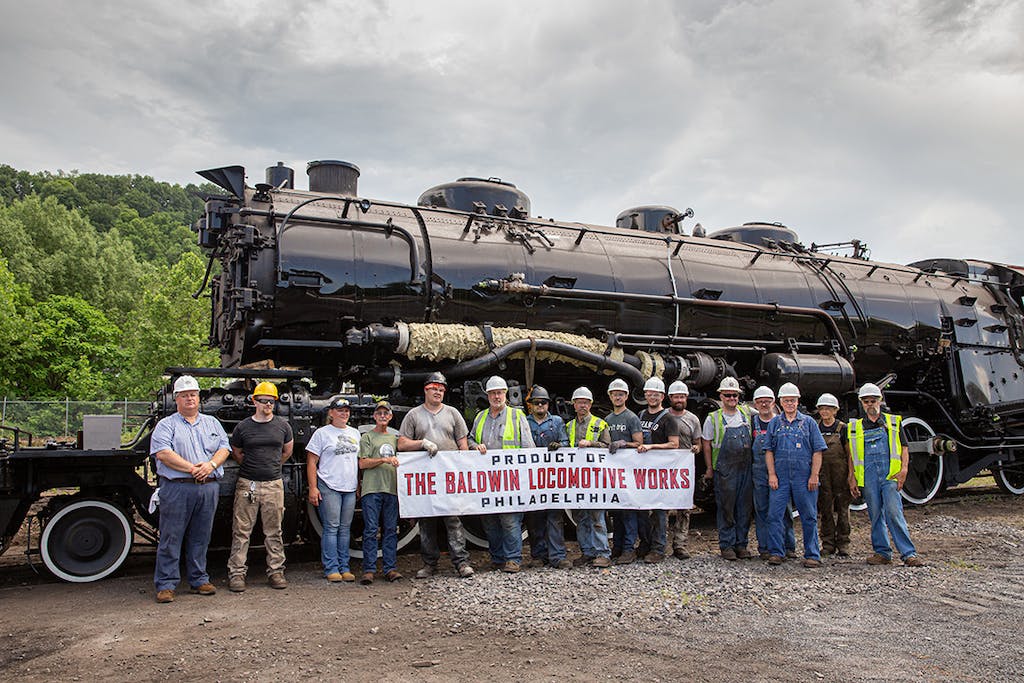 CUMBERLAND, MARYLAND – A new partnership between the Western Maryland Scenic Railroad (WMSR) and the Railroaders Memorial Museum (RMM) in Altoona, Pennsylvania will raise funds for the restoration of famed steam locomotive no. 1361. On the evening of October 14th, a special first-class train will operate between Cumberland and Frostburg, Maryland, and feature two nighttime…

HISTORY OF 1309
by Kevin Keefe

Of all the strange plot twists in the story of steam’s final years, one of my favorites is the Chesapeake & Ohio’s decision in 1948 to buy 2-6-6-2s from Baldwin to shore up its operations in West Virginia coal country.

Think about that for a moment. That year, most American railroads were buying vast quantities of new diesels from Electro-Motive, Alco, and other manufacturers. Steam was clearly on the way out, no matter how well a New York Central poppet-valve Niagara or Norfolk & Western Y6b might perform.

Despite the tide of history, C&O was in a jam and needed power quickly. It served the mines with a big roster of Mallet compounds, some more than 35 years old, and they were wearing out quickly. But instead of opting for more of its modern 4-8-4 Greenbriers, 2-8-4 Kanawhas, or 2-6-6-6 Alleghenies, C&O stuck with a basic locomotive design that dated back to its H-1 2-6-6-2 of 1910.

What emerged was an order for 25 2-6-6-2s in what was the new H-6 class. The order was soon cut back to 10 engines after labor unrest in Pocahontas country depressed mine production. Those final Mallets, delivered in 1949 and numbered 1300–1309, would be the last steam locomotives Baldwin would ever build for a North American railroad.

The story of these engines has currency because crews are hard at work bringing H-6 No. 1309 back to life for operation on the Western Maryland Scenic Railroad (WMSR). Based at Cumberland, Md., with a shop at nearby Ridgeley, W.Va., the tourist line acquired the 2-6-6-2 in 2014 after the locomotive spent decades at the B&O Railroad Museum in Baltimore. New as they were, the last C&O steam engines never got adequate maintenance, lengthening the list of work needed to bring 1309 back to life.

The work in the WMSR shop has been going on for months now, led by contractor Gary Bensman and his Diversified Rail Services firm. But the unexpected setbacks are seriously pinching the railroad’s finances, and donations are actively being sought.

The prospect of 1309 in steam remains exciting. The H-6 class had a lot in common with earlier 2-6-6-2s on C&O, but the 1300s also had improvements you’d expect from postwar locomotives, including roller bearings and improved lubrication. Obsolete though they were on paper, they nonetheless were magnificent machines, in compound mode delivering as much as 77,900 pounds of tractive effort through their two sets of six 56-inch drivers.

As steam historian Ed King puts it, “These were superb engines, not possessing any superlatives in size or weight, but they made an excellent basic design even better.”

Back to the H-6s of 1949: The new engines spent their short careers working out of the Peach Creek terminal on the Logan district. At first, the H-6s gave the C&O all the reliable power it asked for, but even brand new Mallets couldn’t ward off the legions of GP7s C&O began ordering in 1950 and ’51; some of the 2-6-6-2s were retired as early as 1952, not even four years old. All were gone by 1957, with the 1308 eventually going to a park in Huntington, W.Va., and the 1309 to the B&O Museum. The 1308 is owned and maintained by the Collis P. Huntington Chapter, NRHS.

One might imagine what a spectacle the 1309 will create when it’s back in service. For a hint of that, I consulted an expert, the late Eugene Huddleston, the dean of C&O historians and co-author of C&O Power, published by Al Staufer in 1965. Gene was a longtime professor at Michigan State and died in 2011 at age 80.

Gene’s book is full of facts and figures and photographs, but it also contains vivid accounts of his encounters with C&O steam. He recalls a visit to Logan in 1952, when he arranged a rendezvous with the Scarlet Shifter, a regular train working the Island Creek Mine No. 27, a location so far south on the C&O it might be considered N&W territory. He caught a bus out of Logan and arrived in time to find two H-6s taking water at a new wooden tank; photos from that day indicate the lead engine was 1309.

Images of Mallets merely tiptoeing around wouldn’t do, so Huddleston managed to grab a ride out of town with an electrician who was leaving the mine. The driver dropped him off about halfway up the three-mile grade out of Scarlet. Gene takes it from there:

“Soon the doubleheader slowly canted into the curve, and with never a slip, twenty-four drivers under two big boilers produced sight and sound which photograph or tape record could never do justice to. Countless days since, the roar of twenty-four diesel cylinders has rebounded from the mountainside as two 2400 h.p. Alco road switchers in multiple operation have repeated the performance, but never again will this apotheosis of the steam locomotive in action occur.”

“Apotheosis” is a pretty loaded word, but I don’t doubt Gene’s memory one bit. I’m sure those two 2-6-6-2s fairly ripped apart the Island Creek valley that fine day. It’s something we all can look forward to repeating soon when, and not if, the Western Maryland Scenic has the 1309 back in fighting trim. It should be quite a show! 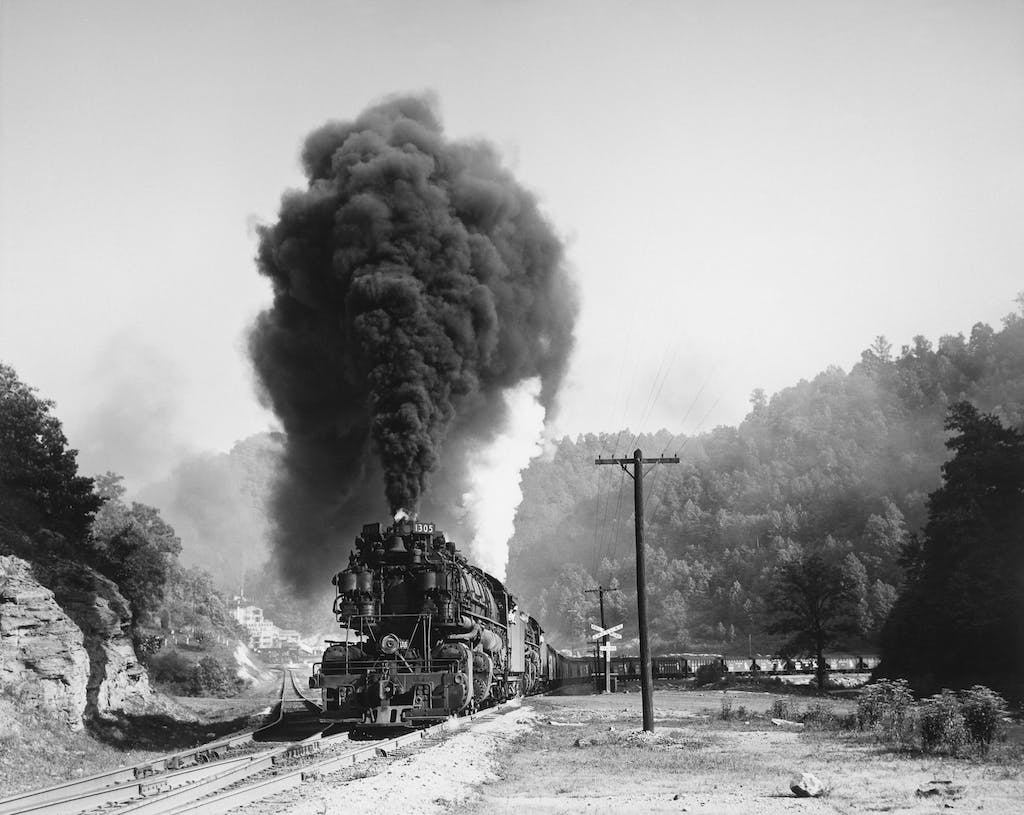 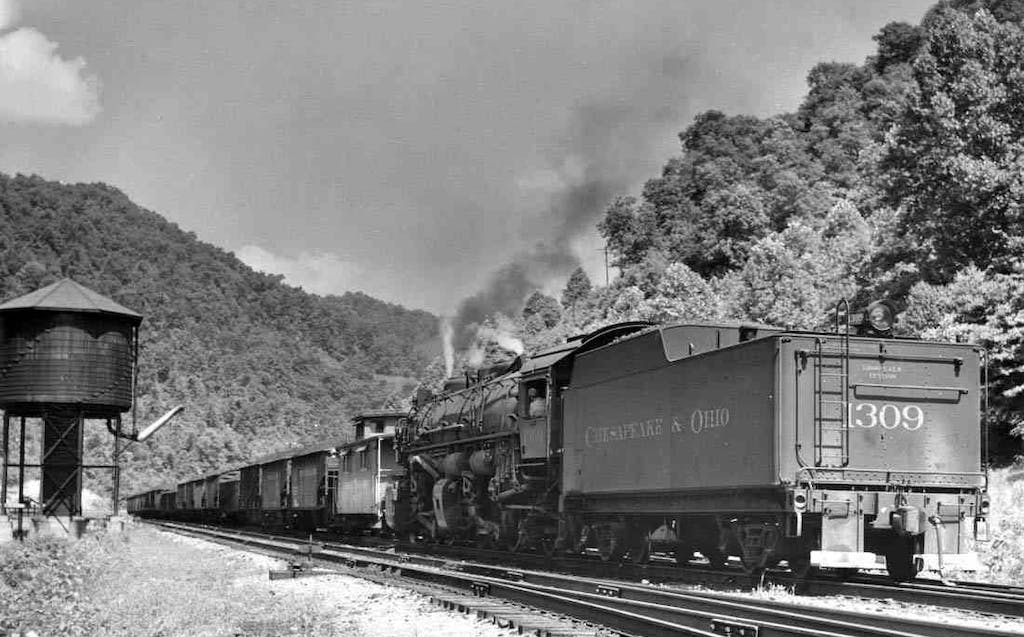 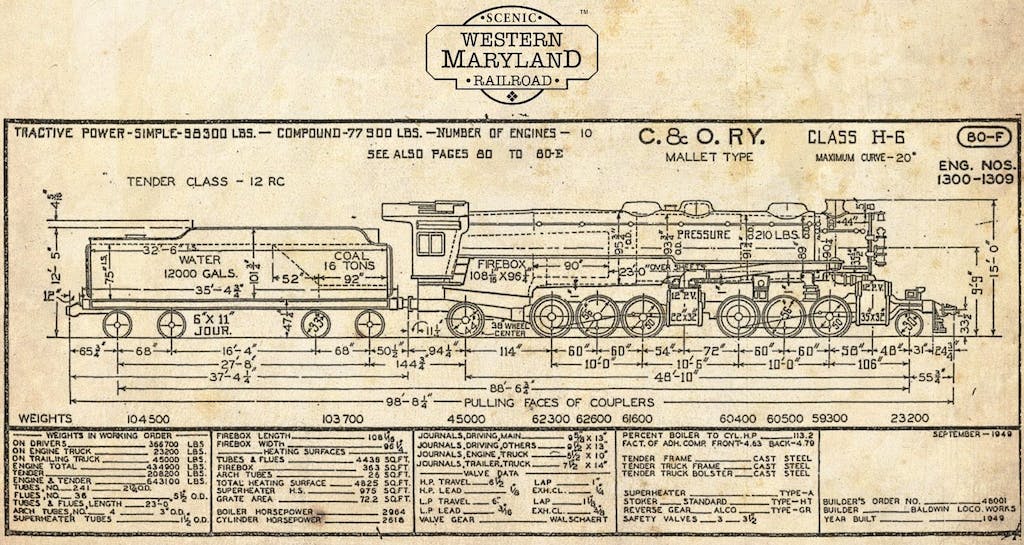